A Letter From Our Founder

When I started sharing my process of securing scholarships for college with family and friends, I never imagined it would turn into this. Seeing students secure scholarships for college, and the relief parents experience knowing they are in control of how much debt their student has to take on, feels better than I ever could have imagined.

Whether you join one of our programs or not, I hope some of these success stories below (which are just a taste of what we've seen over the years) help inspire your family to pursue scholarships for college.

Scholarship Dollars Won by our Members
$
(As of August 2022)

"Been there, done it, let me show you how to do it - that's what
The Scholarship System is." 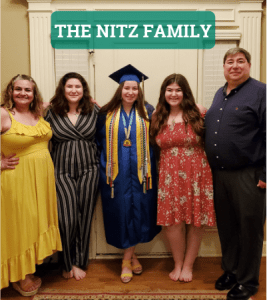 Essentially Being Paid To Go To School!

With the outside scholarship awards and her financial aid packages, she would have been able to attend 4 of the 6 schools on her final list debt free. Her final choice actually results in approximately $8,000 per year awarded beyond my debt free degree standards listed below. Her hard work applying for scholarships has her with no loans and not having to work while in school. She is essentially being paid to go to school!!!

We broke down the amount of time she spent on scholarship essays and the rough numbers were 3 hours per essay so approximately 100 hours. $42,000/100 = $420/hr. That is the best part time job I have ever heard of!!! She may have complained when she was "forced" to work on essays and scholarship applications but today she sees the results of her hard work. I am incredibly proud of her accomplishments and wanted to share our experience with the other The Scholarship System families.

While this chapter has been focused on scholarships, there is so much more that goes into earning a debt free degree. We have also focused on choosing the right school, our personal tax situation, major choice, grades, and ACT/SAT scores just to name the big ones. Our family defines graduating debt free as: tuition, room and board, fees, and books. As we all know this is no easy task. Also, in my opinion, merit based scholarships are things anyone with the right credentials can earn. As an example, have a 3.0 GPA and get X off of tuition. These scholarships are vital parts of the process and cannot be ignored. They are rewards for the accomplishments your student has done to date. The scholarships most of the families here are chasing are those targeted and competitive outside (sometimes school specific) scholarships.

Now I will start this process over again with my youngest daughter as she begins her junior year this fall. She has already been active and is 2/2 on scholarships applied for to date totaling $7,000 in current scholarship awards. Thank you all for reading my long winded post. Good luck as you continue to pursue a debt free degree for your children. It can be achieved!!! 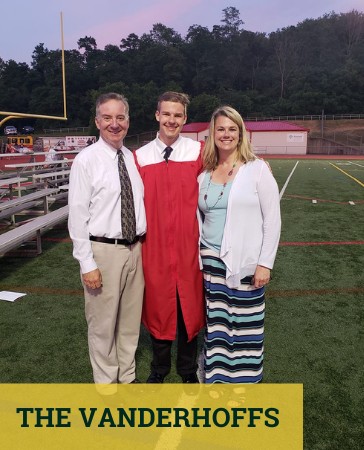 YEAR 3 DEBT FREE! I am so glad I found this system in 2019. It was his Senior year of HS when we discovered this, and 3 years later he is 3/4 of his way to a DEBT-FREE DEGREE! Thank you for your group!

Have another win to share - my son just got his financial aid package offer for his Junior year of College, and will be able to cover EVERYTHING with scholarships, grants, his RA income, and a small amount (less than $1000) from his summer job. In other words, YEAR 3 DEBT FREE!

One year to go, but he is crushing it so far. 20 years old, no debt, $3000 in a Roth IRA, and his credit score is higher than mine (and mine is excellent). I am so glad I found this system in 2019. It was his Senior year of HS when we discovered this, and 3 years later he is 3/4 of his way to a DEBT-FREE DEGREE! Thank you for your group!

I signed up for Jocelyn Pearson’s Debt Free Degree lab and gained the information and confidence we needed to believe it could be done, and to learn how to do it. From there, my son had to put it to work, which he did. Applied for 25+ scholarships, worked hard at his job when home from college, got a job as an RA at college, saved carefully and spent sparingly.

First off, I have to recommend joining DFD Lab. It paid for itself ten times over and is worth every penny as long as you put in the work.

Some of the avenues my son pursued:

He is NOT a straight A student, did OK on the SAT (scored around 1140 I think), and we are middle class income level. It was a lot of hard work, but having the right information and a sense of direction was huge, and that is what DFD provided for us.

We’re at about $84,000, not quite five digits. Yet. This wouldn’t have been possible without DFD/TSS. Truly. #rebelfamilies " 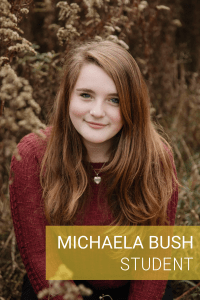 So—my Daughter has worked a bit to get scholarships and grants, though it’s been a bit of a challenge this year—crazy schedule, three musicals at school, a boyfriend breakup, and she worked a job—all in an effort to not take out a loan this year. We are also fortunate to have some 529 money, but we’re trying to stretch that out for grad school.

We didn’t work the program to its fullest because of working and the 529 money, but I don’t foresee the next few years to be as fruitful as the freshman year, so we’ll be working the program a bit more!

It’s because of DFD that we considered looking at private schools over state schools because of the opportunity to win merit scholarships. It worked. A lot!!

Because of her hard work academically (3.71)(NHS), she’s walking into a private women’s university with $19,000/year for four years. There are other grants and scholarships that amounted to $26,534. We appealed, without a really good reason, and won $1,000 for four years.

Writing scholarship letters (TSS) also made a difference. She was encouraged to apply for a full ride scholarship. We worked hard on the application, and chose the right people to write a letter of reference. Nearly 100 applicants for 6 awards, and they selected a group of 12 as finalists. Michaela was a finalist. We were disappointed that she didn’t win (volunteer stuff was weak, I figure), but they did award her $1,000/year for 4 years for being a finalist.

Those scholarship letters got to a point of cut and paste and allowed for tweaking. When it came to the scholarships offered by her high school, she won an additional $12,125. One of those scholarships was outside—didn’t know really what it was. Turns out it was national, competitive, and out of over 750 applicants, she was one of 33 that was awarded $2500. 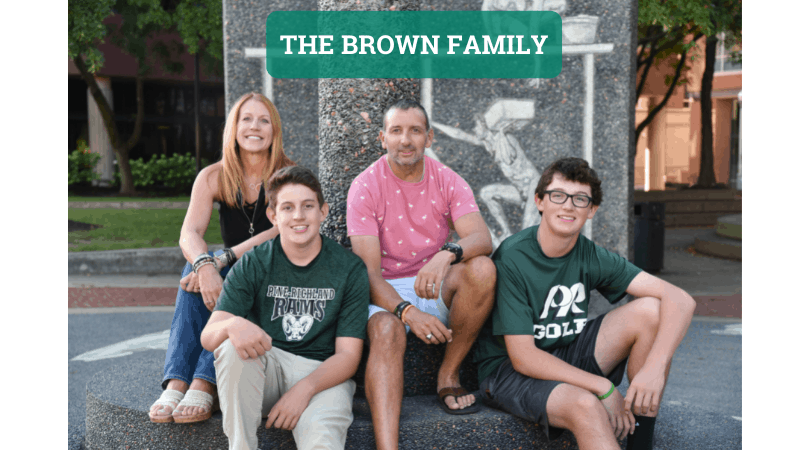 These Programs Saved Us!

We signed up for both programs. The Scholarship System (TSS) for my 2 sons to learn the techniques to writing better essays, brainstorming ideas, and finding scholarships that are not scams.

We are also a part of Debt-Free Degree (DFD) Lab so my wife and I can learn how to close the gap on the cost of attendance - essentially learning ways of gathering funds where scholarships leave off.

DFD Lab does discuss scholarships to a certain extent but TSS completely focuses on that task at hand.

These programs saved us! A year ago, we were trying to navigate the whole college process alone, bad move! These courses, along with the community in the Facebook groups have made the journey far more manageable and considerably less stressful!! I hope this helps!

My oldest is off to college in August and he's very excited. He'll be attending Penn State University studying mechanical engineering.

Our other son, who will be a junior in high school this fall, has watched a few of the videos and is looking forward to getting knee deep into the TSS and DFD materials this summer/fall. 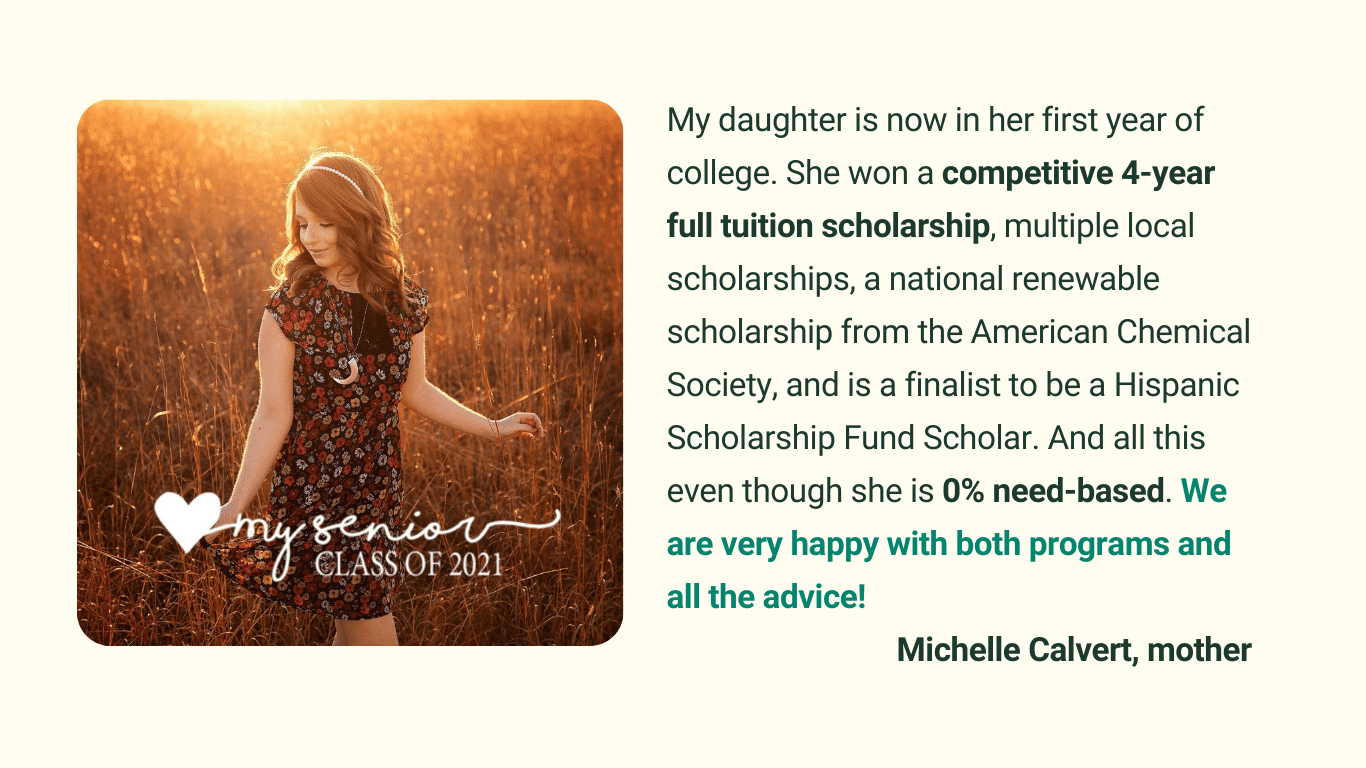 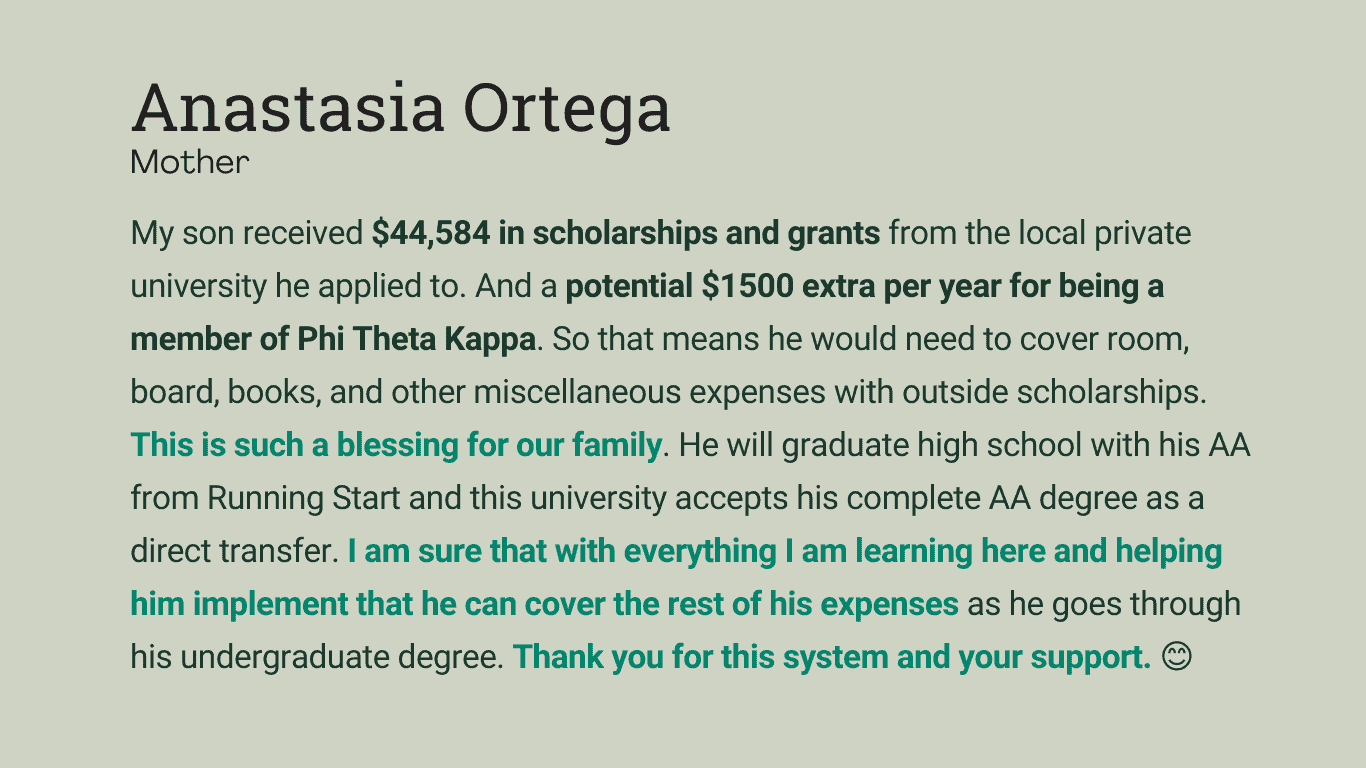 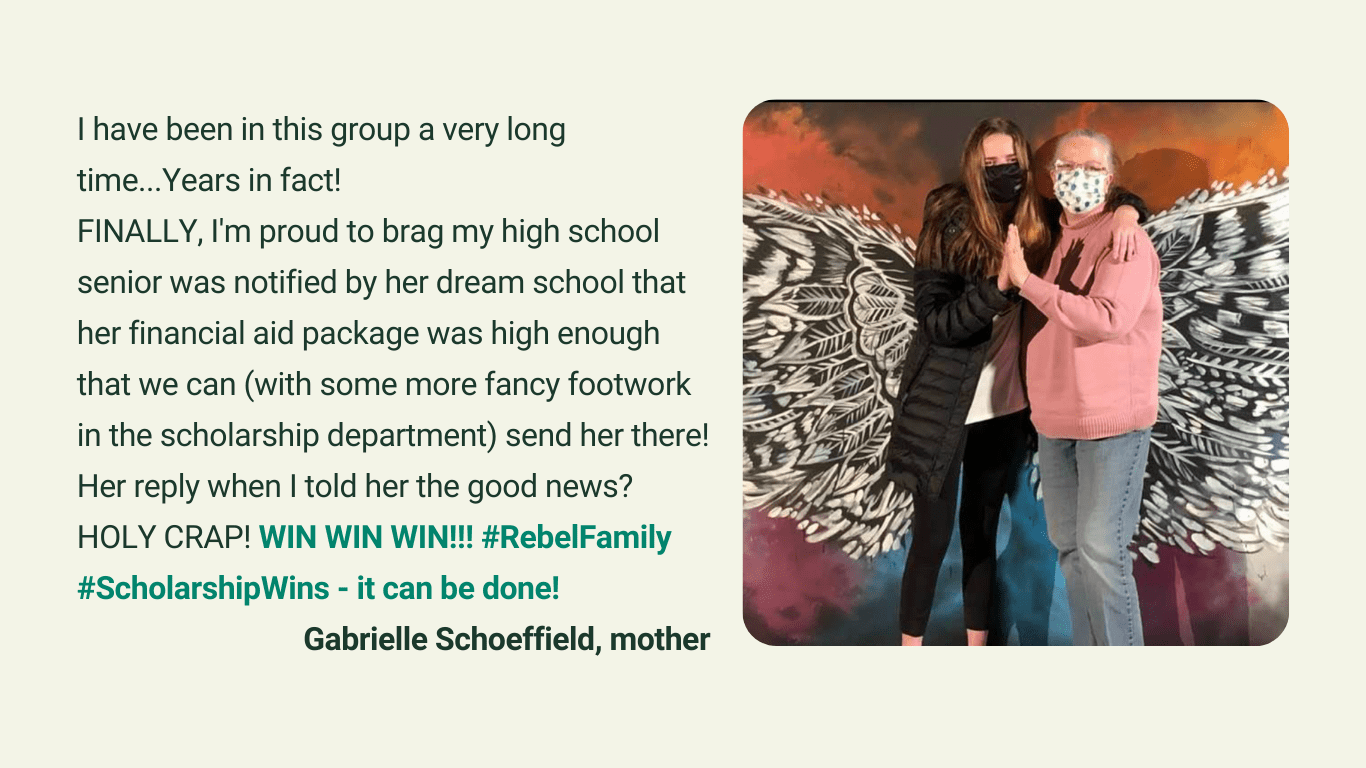 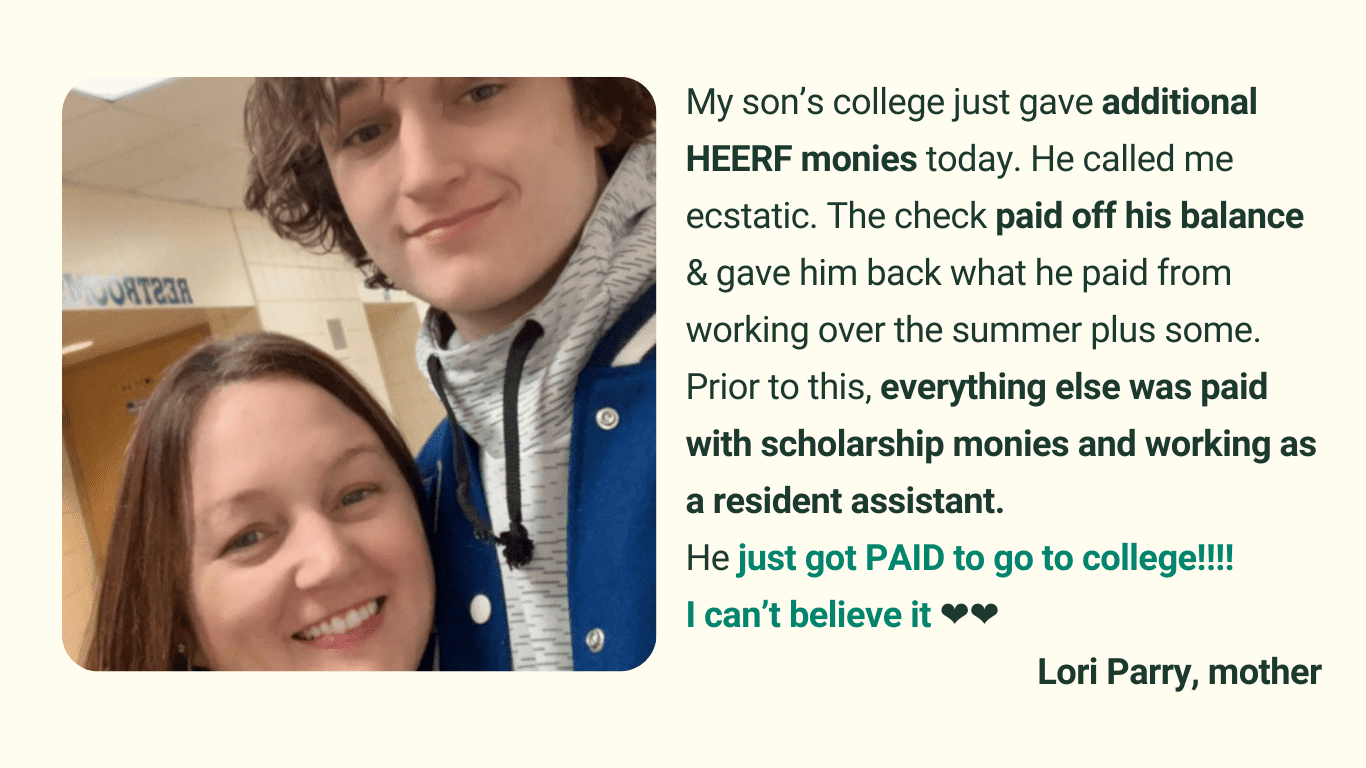 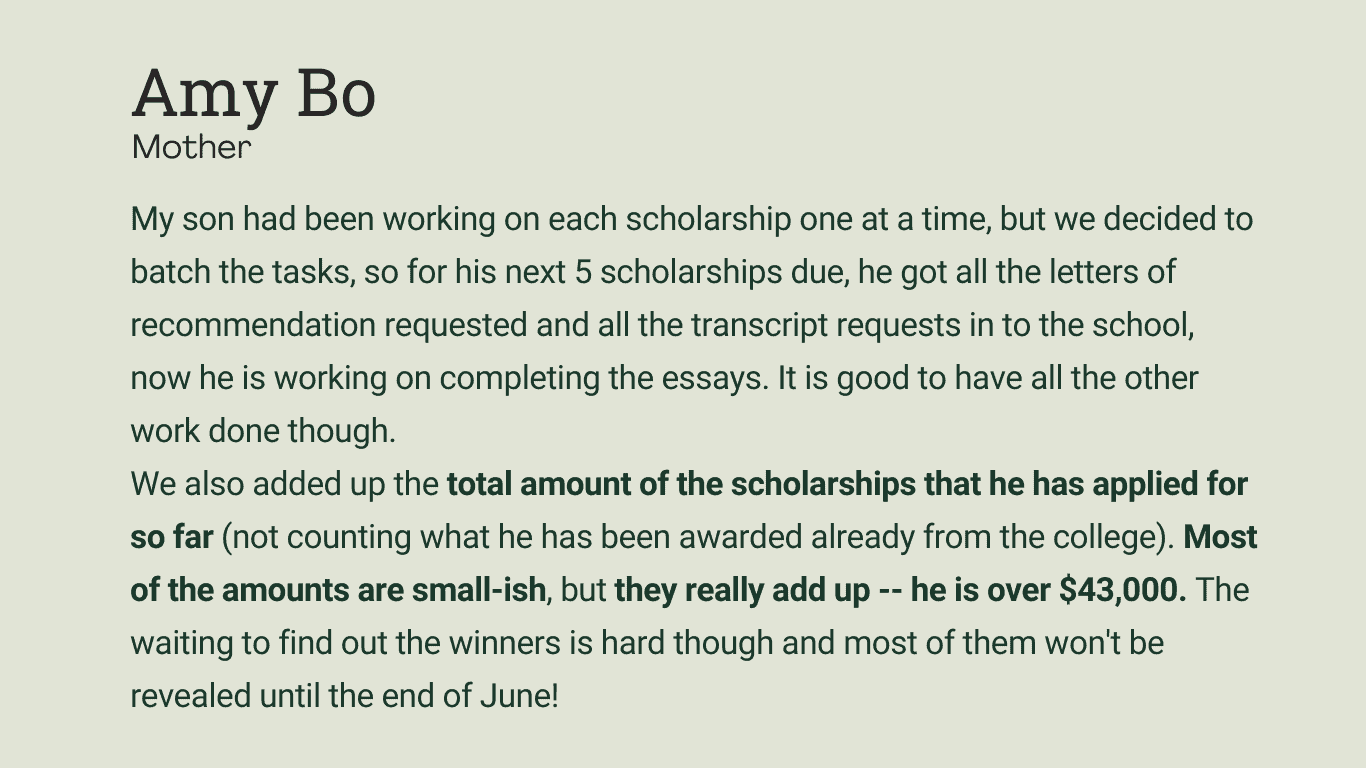 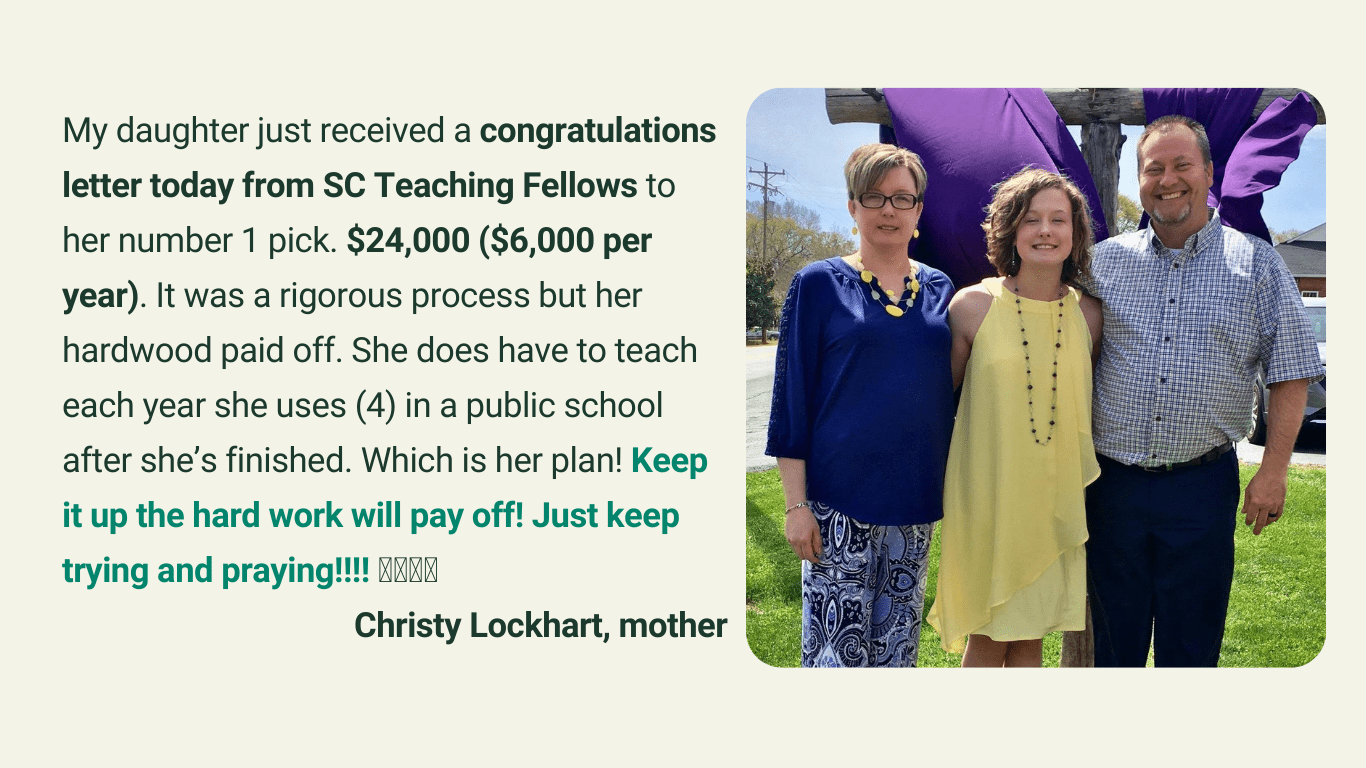 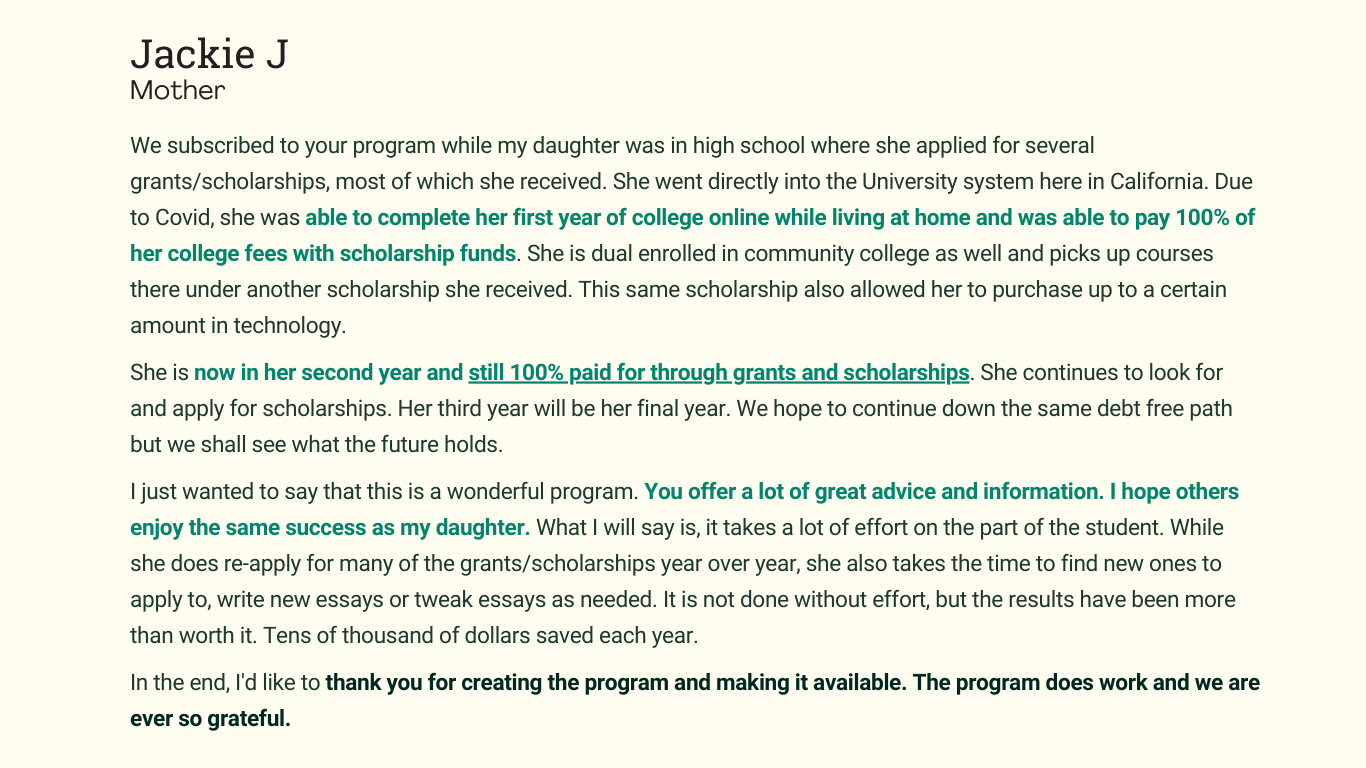 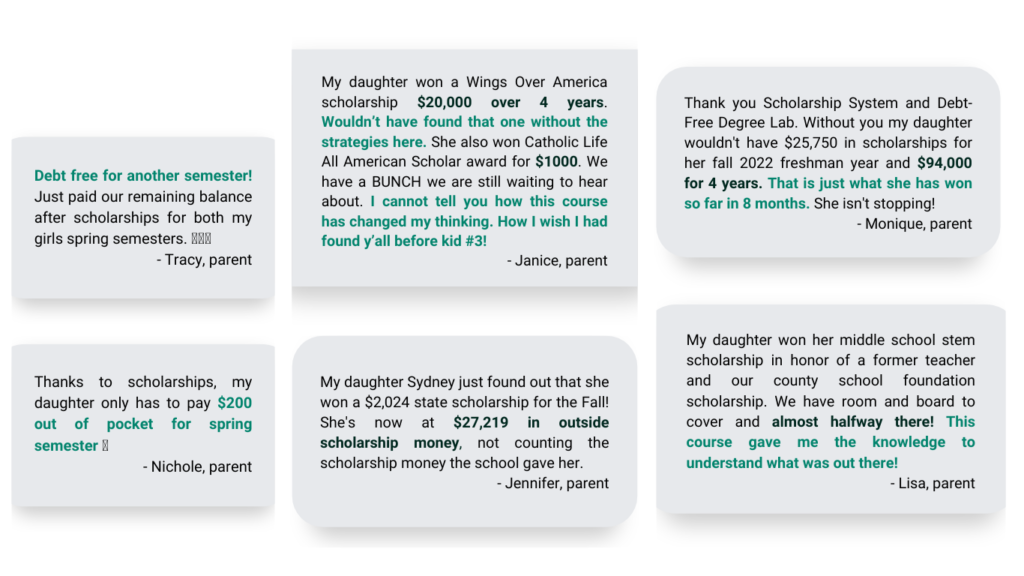 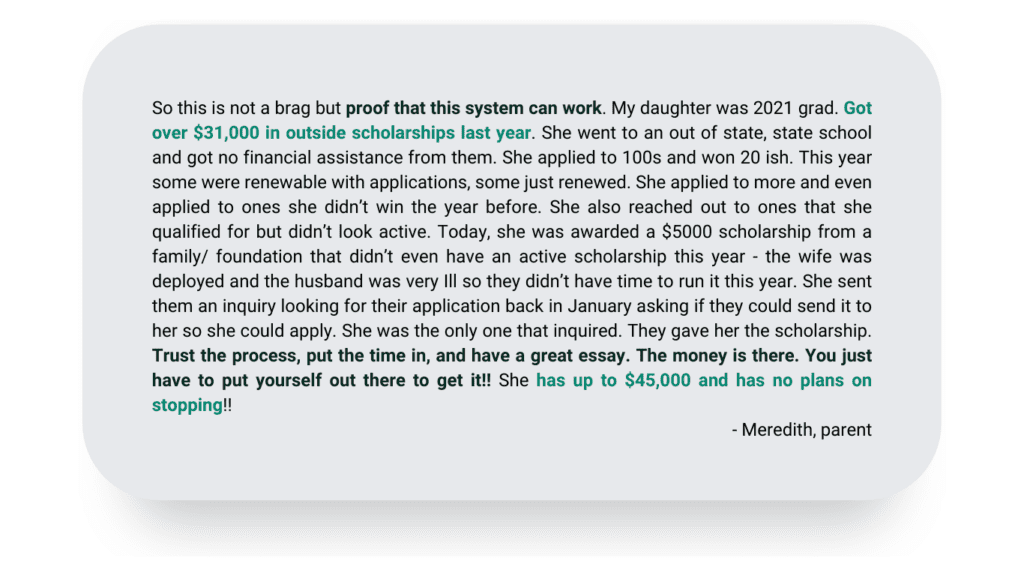