Yes, I want in!
Home » How to Graduate Early from College (and Save Money) 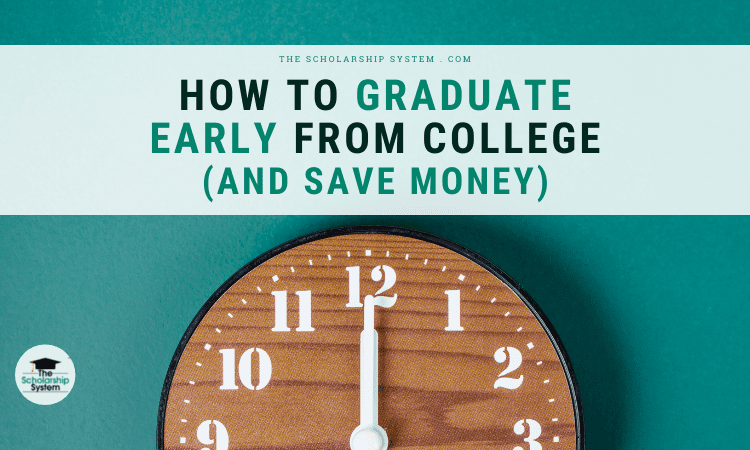 Can you graduate college early? It’s a question many students ask. Once they realize that it’s an option, figuring out how to graduate early from college ends up a priority.

Graduating early is challenging, but it is potentially doable. Students simply need to plan for the faster approach, ensuring they can handle the requirements of their degree program efficiently. Additionally, they need to make sure that it’s the right choice for them, as moving at a quicker pace doesn’t suit everyone.

Here’s a look at whether accelerating their education is a smart move, as well as an overview of how to graduate early from college.

Should You Graduate Early from College?

If your student is trying to decide if the benefits of graduating college early make it worthwhile, there are a few things they’ll need to consider. Here’s what they need to know.

Graduating early from college does have a financial impact. Since your student will spend fewer semesters on-campus, they’ll spend less on room and board. Plus, with most fees being term-based, they may reduce what they have to pay to cover fees.

Ultimately, they’ll spend less overall by graduating early, particularly if they reside in on-campus housing and use a meal plan. However, that doesn’t mean the entire financial picture is rosy.

It’s critical to know that some colleges charge fees for overloading. In that case, your student may be paying a bit extra for some of their classes. While the fee doesn’t offset certain other kinds of savings, it’s important to know that it can happen. 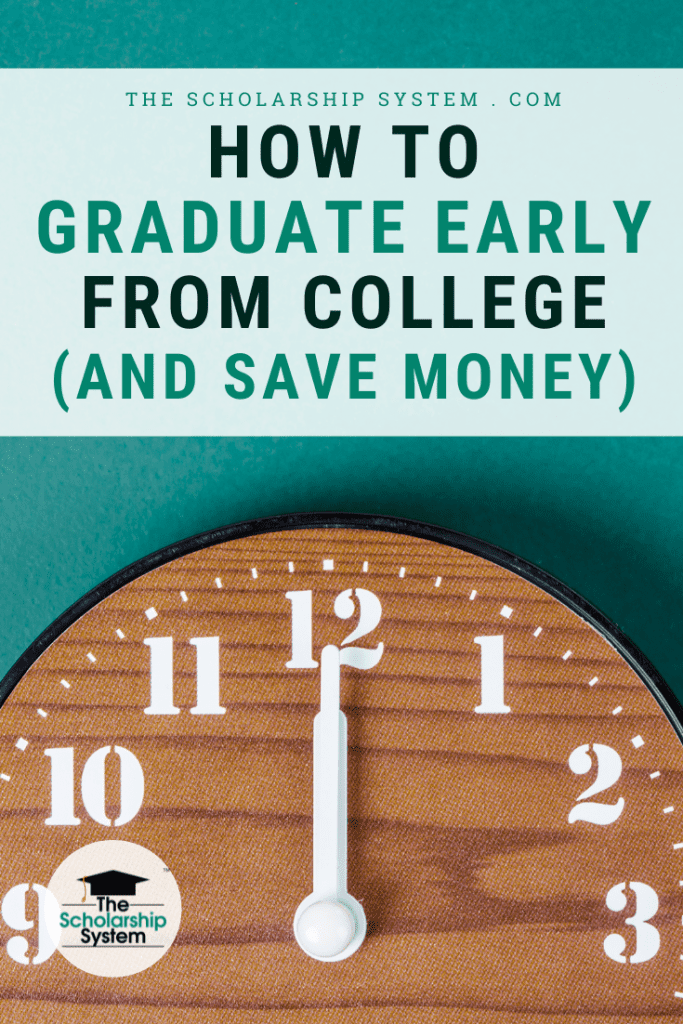 Additionally, students have access to only a certain amount of federal financial aid during the year. That annual limit doesn’t increase if a student takes more than a traditional number of classes during the academic year.

Since graduating early usually means heavier course loads or taking classes during the summer, your student might have to look for alternative options to cover the costs. Scholarships are frequently the best option, giving students extra money for school that doesn’t have to get paid back.

Otherwise, your student might have to explore alternatives. This could include getting a job to bring in cash for tuition or course fees or exploring private student loans. 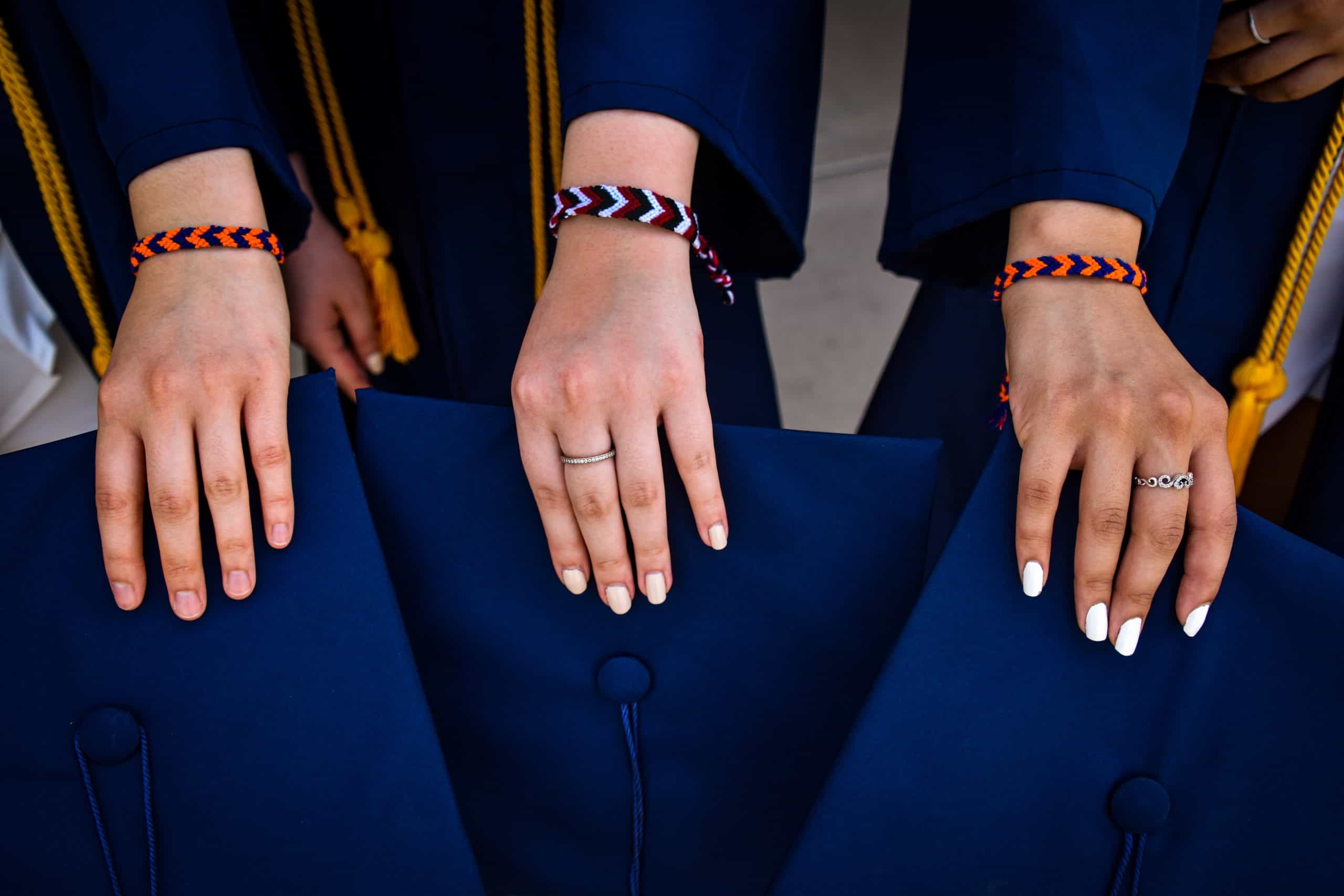 On the professional side of the equation, graduating early typically allows your student to kick off their career quicker. Plus, hiring managers might be impressed by their early graduation. In that case, your student may be able to leverage that into a more substantial job offer, though that isn’t guaranteed.

However, the effort required to graduate early could mean your student won’t have time for an internship or professional networking prior to graduation. That could – but doesn’t always – work against them, so it’s critical to keep it in mind when deciding.

When it comes to graduating early from college, there are some personal considerations to navigate. First, it could mean that your student won’t graduate with their friends. While this may not seem like a big deal initially, it can create a social divide, which isn’t always ideal.

Additionally, the heavier course load that’s usually required means having less time for socializing, self-care, and extracurricular activities. If your student takes on too much, their entire life can quickly become about academics. In some cases, that may lead to burnout.

However, it also means your student gets to move forward faster. If they’re genuinely passionate about their upcoming career (and life), the idea of getting there sooner may keep them motivated. Plus, some students will have stronger social success after graduation. In those cases, students may look forward to ending their academic experience as soon as possible, making the extra effort worthwhile. 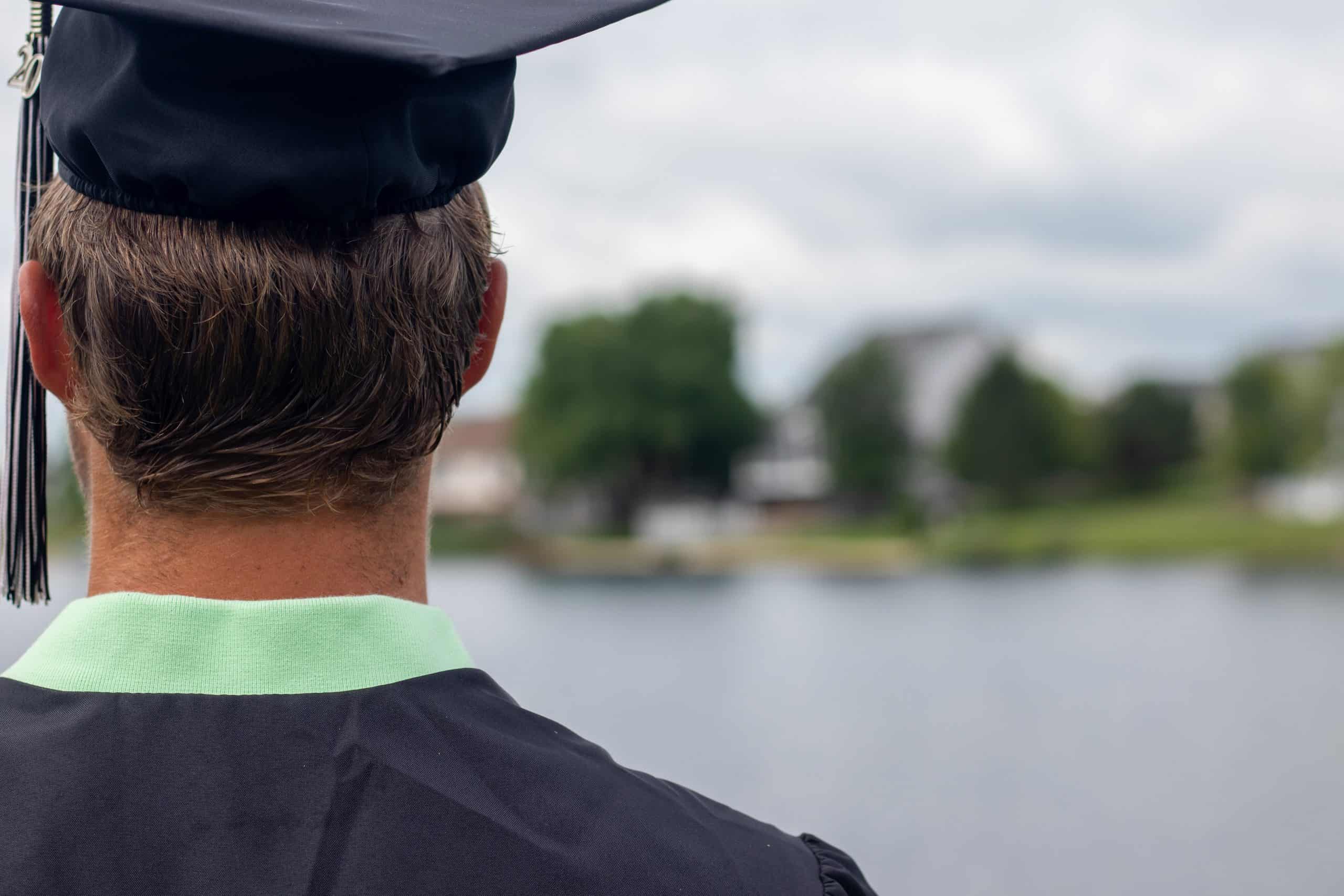 How to Graduate Early from College

If your student is still in high school, AP classes could be their ticket to graduating early without some of the issues above. They may not have to take a heavier course load or summer classes since they’ll be able to earn credits before they start college.

Your student could also explore other options. For instance, CLEP exams can have a similar effect, allowing them to get credits without having to take the corresponding course in college.

Some high schools allow specific students to take college classes instead of regular ones, too. If that’s an option, your student can get a significant head start, allowing them to earn a degree faster than they would if they waited to begin until after completing high school.

If your student wants to know how to go to college early, allowing them to get credits while in high school, they’ll want to ask their guidance counselor about dual enrollment options. Usually, guidance counselors can let students know what options are available, making them a solid starting point.

Finding accredited colleges offering accelerated online courses is easier today than it was in years past, making this a solid option for students that want to know how to finish college early. Instead of a traditional length class, these courses usually wrap up in about eight weeks, depending on the school.

Students can use this option in several ways. First, they could decide to go to college entirely online, doing everything it takes for their degree remotely. Second, they could take online courses before enrolling in an in-person university

With the latter approach, they’ll wrap up some classes faster than they could otherwise. Then, they’d transfer to their preferred school, bringing the credits with them.

Usually, option two works best for handling general education requirements, as those are commonly applicable to any degree program at most schools. Plus, they may be easier to transfer than more specialized, major-specific courses. 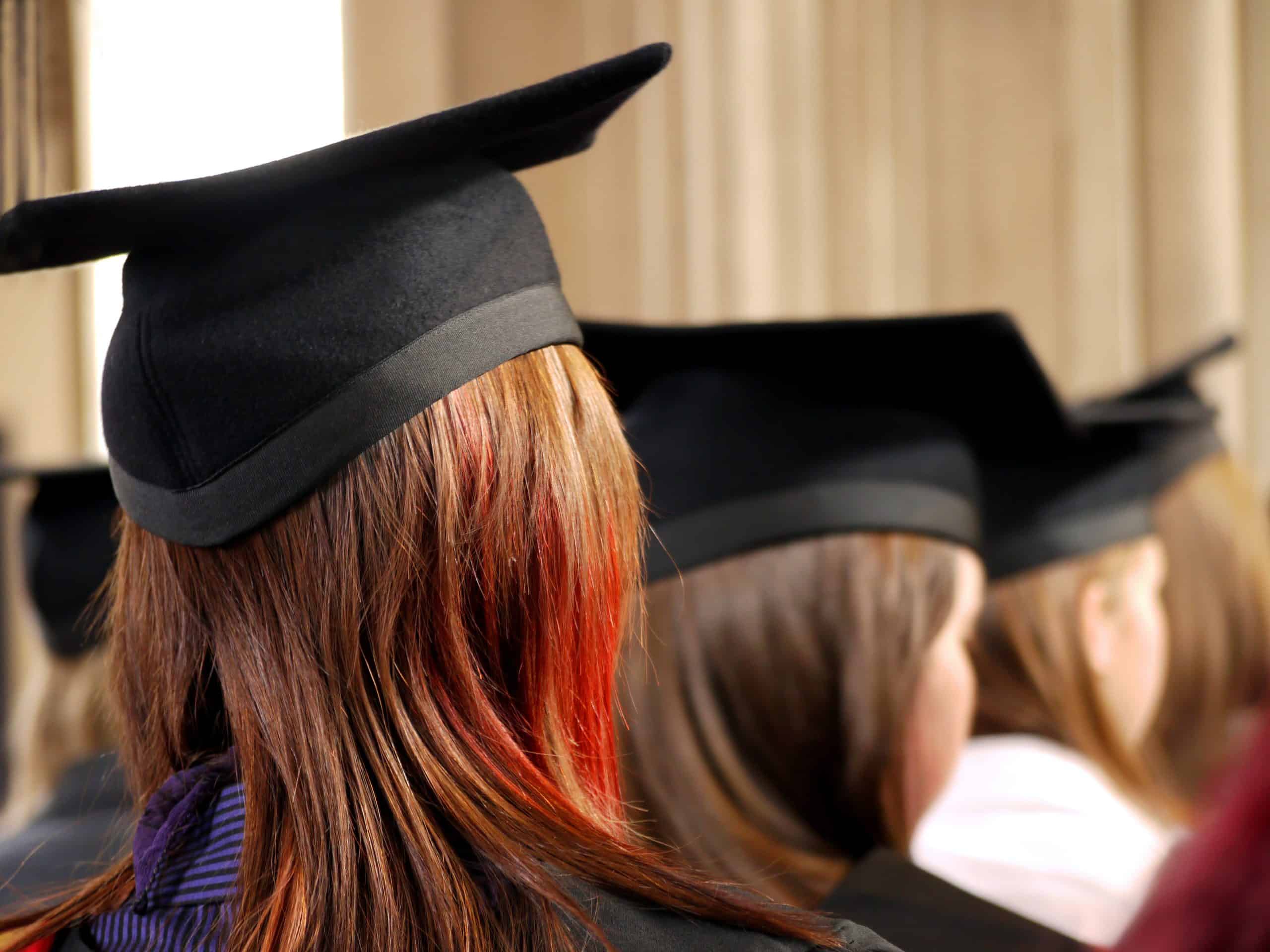 Usually, 12 hours per fall and spring semester is considered full-time for students. However, that doesn’t mean students are limited to that amount.

Depending on the school, students can typically take 17 or 18 hours of courses without any prior approval. However, academically inclined students may be able to cross that threshold, giving them a stronger option for how to graduate college early. They simply need to get special permission from the college to overload.

By signing up for more hours each semester, your student can graduate faster. Since a bachelors usually requires 120 hours, taking 18 hours per semester could allow your student to earn their degree in 3.5 years even without AP course credits or similar head starts. If they get approved for 20 hours instead, they could be done in three years flat.

Summer semesters are broadly considered optional. However, if your student wants to figure out how to graduate early without taking an incredibly heavy course load during the year, taking classes during the summer is a great option.

Even taking just two courses during the summer adds up. In three years, your student could wrap up 18 hours this way. Then, they could graduate in 3.5 years while only taking around 15 hours in a traditional semester. However, if they’re comfortable with 17 hours per semester, they could be done with their degree in just three years, even if they didn’t use AP tests or other options to earn credits before starting.

An Important Note About Attempting to Graduate Early

While figuring out how to graduate college faster may initially be your student’s goal, it’s easy to assume that heavier course loads are more manageable than they are in reality. If your student starts to take extra hours and begins struggling, they need to understand that it’s okay to change their approach.

Essentially, graduating early isn’t a necessity. If it requires too much sacrifice, is putting them on the path toward burnout, leads to a declining performance, or causes any other issues, it may be best to go back to a normal course load. That way, they can work on their degree while remaining happy and healthy, which, in the end, is what matters.

« Do Colleges Look at Your Social Media?
Attending College in South Dakota: What You Need to Know (Including South Dakota Scholarships) »