Home » Weighted vs. Unweighted GPA: What You Need to Know 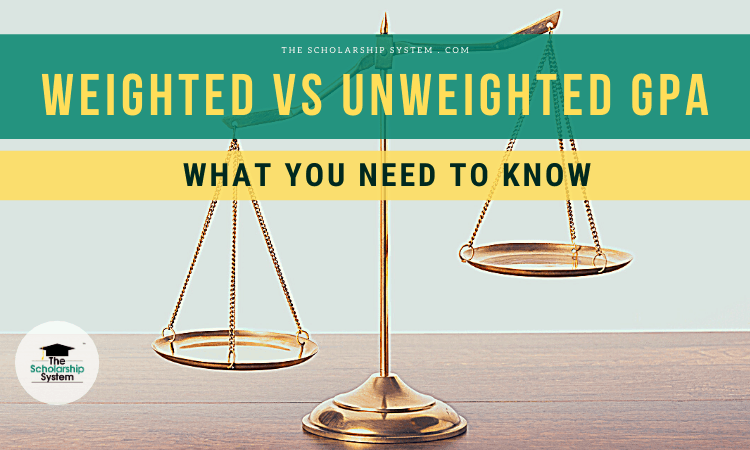 Weighted vs. unweighted GPA; while students know that colleges look at their GPAs when making admissions decisions, it’s common to have questions about these two variants. However, the biggest one is usually, “What is the difference between weighted and unweighted GPAs?”

Luckily, how these two options stand apart is pretty easy to figure out once you understand the terms and how colleges use each version. If your student is wondering what a weighted and unweighted GPA is, and whether the weighted vs. unweighted GPA debate matters to your student when they apply to college, here’s what you need to know.

Before we dig into the weighted vs. unweighted GPA comparison, it’s important to understand what each of the initialisms means. Here’s a look at a few of the key terms your student needs to know.

What Does GPA Stand For?

GPA stands for “grade point average.” It’s a reflection of how well your student did in school by averaging the value of their grades.

However, there are several scoring models available, and not all of them focus on whole numbers. For example, an “A-“might not secure a student a 4.0 score. Instead, it may be a 3.7. 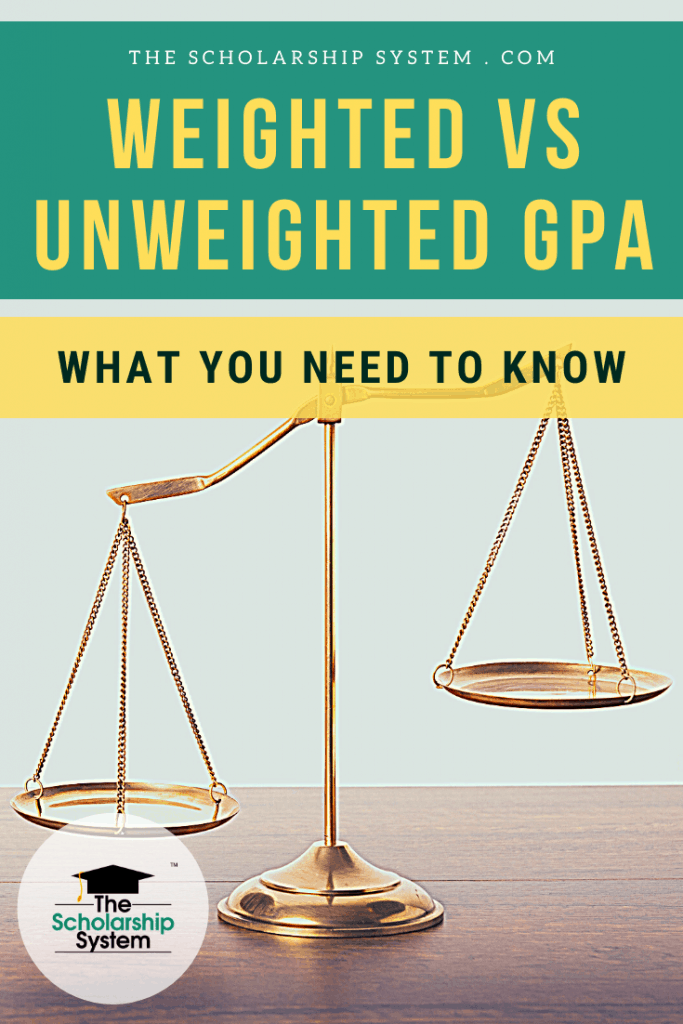 To get a GPA, all of the point value scores a student receives for courses during a specific period are added together. Then, that number is divided by the total number of classes taken during that time. That number is then the student’s GPA.

What Is an Unweighted GPA?

An unweighted GPA uses the scoring approach above. It relies on a 4.0 scale and, on that scale, no grade is worth more than a 4.0, regardless of the type of class involved.

According to the College Board, the most commonly used 4.0 GPA scale is as follows: 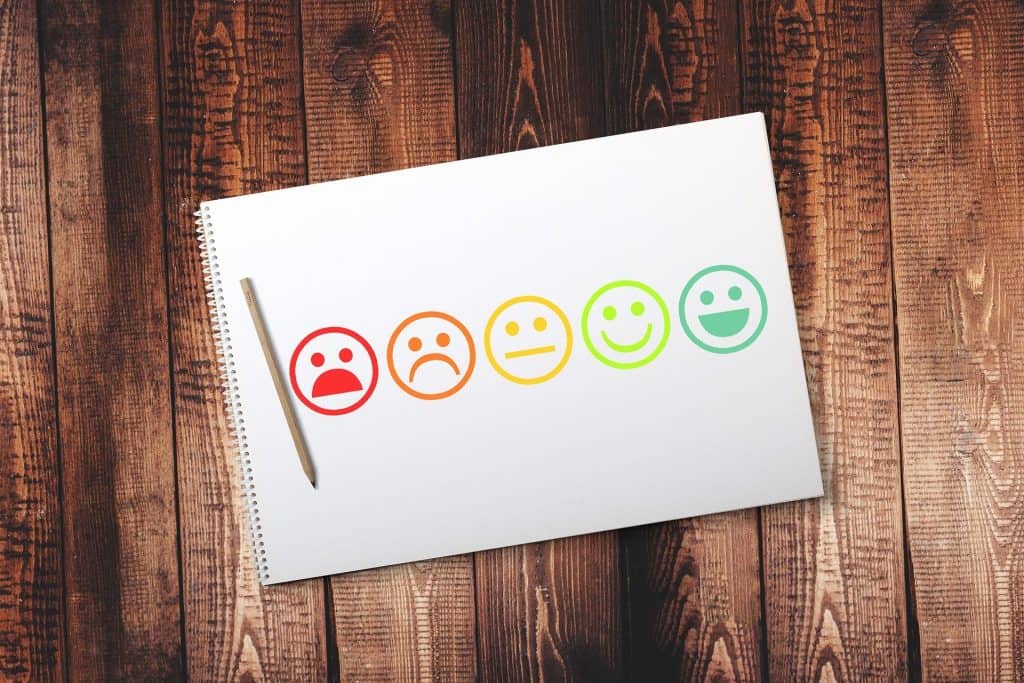 What Is a Weighted GPA?

Weighted GPAs take the difficulty of a class into account. More challenging courses, like honors or AP classes, can be worth more than a 4.0 – up to a 5.0, actually – depending on a student’s grade.

Generally, when you calculate a weighted GPA, you add 1.0 to the score from the table above. The only exception is for an “F” grade, which is still a zero. Here’s a look at what a weighted scale usually looks like:

Only actual honors or AP courses get the bumped up score. For example, imagine a student who took six classes and got above 93 percent in all of them. That would be six 4.0 scores using the unweighted 4.0 scale, creating a GPA of 4.0.

However, if one of them were an AP class, one of those A’s would be worth 5.0 instead, but only the one. The other five would still be 4.0 scores. That creates a GPA of about 4.17.

What Does CGPA Stand For?

CGPA stands for “cumulative grade point average.” It is calculated by averaging the score a student receives in all of the classes they have taken and reflects a student’s GPA across their entire high school career.

What Is the Difference Between a Weighted and Unweighted GPA?

When weighted GPAs are used, students can have a GPA above 4.0. Typically, reaching a GPA of 5.0 isn’t possible, mainly because there usually aren’t honors or AP versions of every class required for graduation.

What Is the Difference Between GPA and CGPA?

In most cases, people use these terms interchangeably. However, a GPA can refer to scores during a specific period, such as one semester or school year. CGPA always refers to a student’s entire career at that schooling level (such as across their whole high school or college experience).

Still, if your student uses the term GPA when talking about their CGPA, that isn’t necessarily a problem. Additionally, if they are filling out a college application or applying for a scholarship and are asked for their GPA, it usually means they need to list their CGPA.

Here’s a quick overview of how to calculate a student’s GPA under both scoring models. 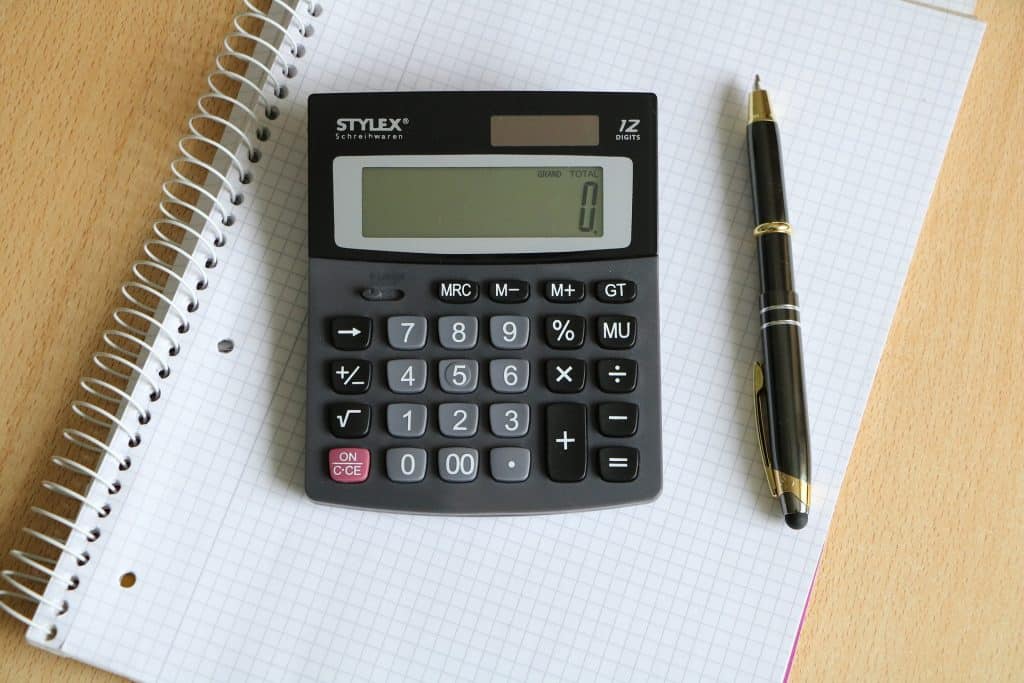 How to Calculate an Unweighted GPA

To calculate an unweighted GPA, your student first needs to gather their grades from each class they will include in the calculation. If they want a CGPA, that means every course during their high school career. However, if they want to see how they did in a particular semester or school year, they can limit the calculations for those grades.

After they get all of the scores, they add them together. Then, that number is divided by the total number of classes.

Here’s an example of a GPA from one semester:

How to Calculate a Weighted GPA

With a weighted GPA, the student has to use the 4.0 scoring model for traditional classes and the 5.0 scoring model for AP or honors classes. It gives students additional points because some of the courses are considered challenging but leaves the regular classes on the 4.0 scale because they don’t have a difficulty bump.

Here’s the same sample schedule as above, but with the adjusted weighted scores for certain classes:

As you can see, only the AP English and AP Biology scores get point increases, as those are the only two higher-level classes. 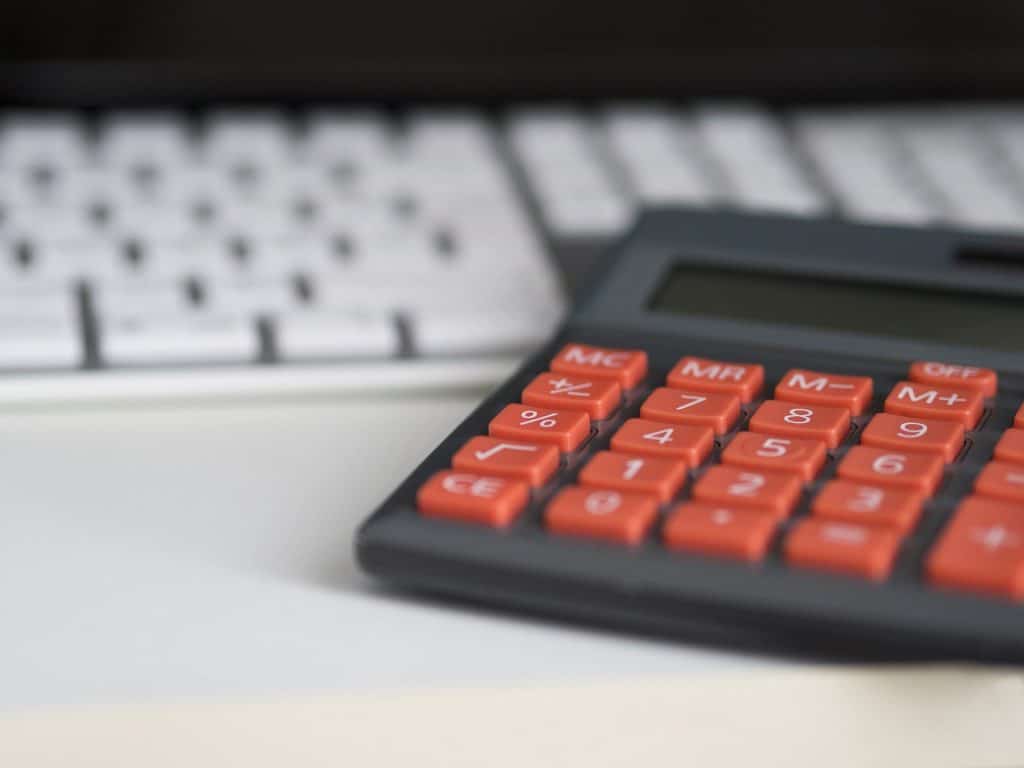 How to Calculate an Unweighted GPA from a Weighted GPA

You can technically convert an unweighted GPA into a weighted one. Your student will need to know their GPA, how many classes were used to calculate that GPA, and how many courses can receive point increases because they were AP or honors.

Based on the sample schedule above, the student had an unweighted GPA of 3.05. Since that GPA included six courses, they can multiply that number by 6, giving them a score total of 18.3.

Every AP class is eligible for a 1.0 weighted score increase. Since the student took two AP classes, multiply the 1.0 (the score increase) by 2 (the number of AP classes). You get 2.0.

Weighted vs. Unweighted GPA: Which One to Use When Applying for College

When your student completes college applications, they usually have to provide their GPA. In most cases, the application doesn’t specify which GPA to use. That leaves many students confused, especially since they don’t want to make a mistake that could hurt their chances of getting into their first-choice school.

Luckily, there usually isn’t any need to fret. Colleges understand that both scoring models exist. Plus, students have to provide their high school transcript as part of their application packet. The admissions department will be able to look at the GPA and compare it to the course list. As a result, they’ll be able to see that a student took honors or AP courses.

So, should students list their weighted or unweighted GPA? Well, first, they need to check and see if the application or school admission department specifically states which one they need to use. This information might be right on the app, or it could be on the college’s admissions page on its website. If either gives clear instructions about what to list, then your student should include the requested score, period. Otherwise, they failed to follow directions, and that could work against them.

However, if the application and admissions page don’t specify which GPA to include or gives students a choice, students may want to list their weighted GPA. A student’s GPA is just one thing that the school considers, but it doesn’t hurt to include the higher score if they get the chance.