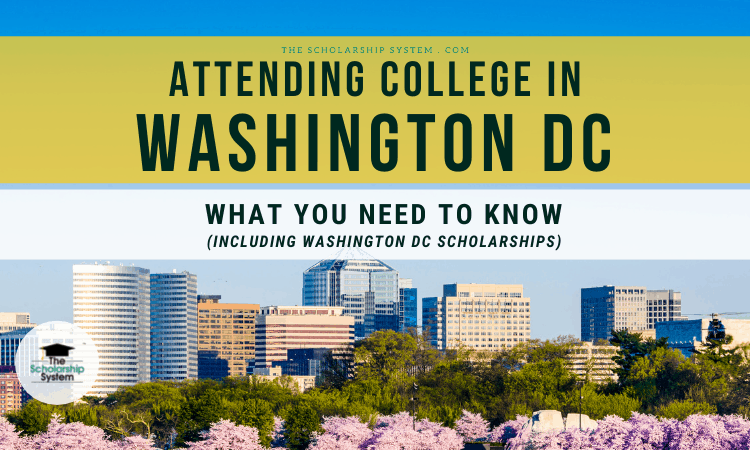 Many students dream of attending college in Washington DC. For some, it’s because the city is the center of government for the country. For others, the area’s history, vibrance, and overall vibe are what make it so attractive.

While, in comparison to states, Washington DC is fairly small, there are a surprising number of colleges within its boundaries. This can make identifying the best universities in Washington DC challenging, particularly since so many are world-renown.

Plus, figuring out how to cover the cost of one of the top colleges in Washington DC isn’t easy for many students. Luckily, with a bit of planning, this can be overcome.

When it comes to paying for college in Washington DC, scholarships can make any school more affordable. If you and your student want to learn more about finding Washington DC scholarships, sign up for our free college scholarship webinar! Take a trip over to http://thescholarshipsystem.com/freewebinar to reserve your spot today.

Washington DC serves as the capital of the United States. Along with being the home of the White House, it also hosts a wide range of federal government operations. The city has a classic hustle-and-bustle feel coupled with a rich history, giving it firm roots.

One of the things that make the city unique is that it isn’t a state in and of itself, and it also isn’t a part of any state. While it’s nestled between Virginia and Maryland, situated along the Potomac River, the city remains separate. Washington DC is its own entity, though some citizens and lawmakers have been pushing for statehood.

While many people wouldn’t assume it, the city is actually in a subtropical region. Washington DC has the full four seasons, ranging from humid, hot summers to cold, snowy winters. During the peak warm season, temperatures reach averages of about 88.4°F, while they fall to an average of 28°F in the height of winter. 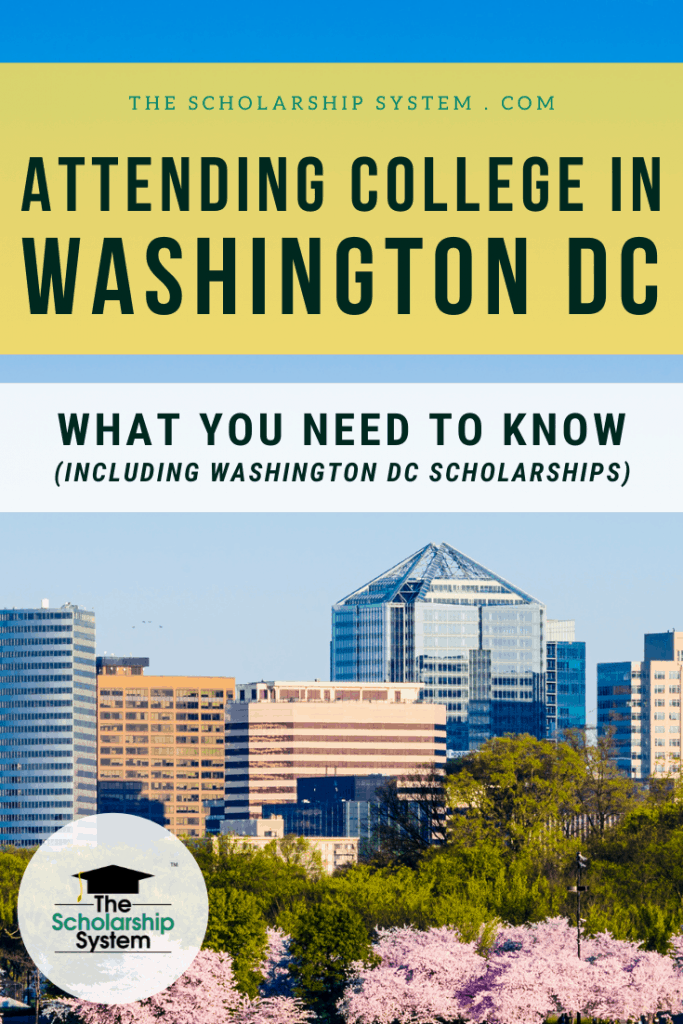 Colleges and Universities in Washington DC

Washington DC is home to 26 colleges and universities, a number that many people find surprising considering the city’s size. The vast majority are four-year institutions, though there are also some two-year colleges thrown in the mix.

Luckily, there are ways to narrow things down. By approaching the research process the right way, students can choose a school that’s ultimately best for them. Here is some information that may make that easier.

While some would argue that Washington DC is a college town through and through, some neighborhoods have more to offer students than others. In some cases, it’s simple proximity to their college or university. In others, it is a youthful vibe, better access to critical amenities, or improved affordability.

By understanding what the Washington DC college neighborhoods are, students can factor that into their search. That way, they can find an area that’s equipped to meet their needs.

Here is a list of Washington DC neighborhoods for college students:

It’s important to note that many of the other Washington DC neighborhoods are viable options, too. These simply offer great proximity to at least a few of the top colleges in the Washington DC area, making them wise places to start.

Even though Washington DC isn’t overrun with colleges, that doesn’t mean it’s easy to start a college search here. Many of the options are exceptional, so students can struggle to identify some of the best in the pack.

In many cases, beginning with some of the major Washington DC colleges and universities is the best choice. These institutions typically stand out from the crowd, though they do so in slightly different ways. Some are known for their size, history, or academic performance. Others get recognition for their culture, sports teams, and unique programs.

If you student can’t decide where they need to send their Common App or application, these can be good places to big. Here is a list of major Washington DC colleges and universities:

Now, if your student has their heart set on a school that isn’t on this list, that doesn’t mean you should panic. This list simply serves as a starting point for students who aren’t sure where to begin. Most of the Washington DC colleges have something amazing to offer, so there is no reason a student shouldn’t keep them on the table.

Most students need some kind of financial aid to make college affordable. Covering tuition, room and board, and the other associated expenses isn’t something many students can do out of pocket. Luckily, Washington DC scholarships and grants can alleviate some of the burden, making many of the best colleges in Washington DC much easier to attend financially.

However, not all Washington DC grants and scholarships are open to everyone. As with all financial aid programs, there is a range of qualifications, and not all students will meet them all.

One of the most common ones is residency. A student who simply comes to the area for college doesn’t qualify as a resident of Washington DC, as they are only in the city temporarily.

Usually, you need to live in the area for at least 12 months to be considered a resident for grant or scholarship purposes. However, you may not have to live in the city proper. In some cases, being a resident of the broader metro area is enough, allowing students from certain Maryland and Virginia counties to also qualify.

Additionally, the student may need to demonstrate their intent to remain in the metro area after graduating. This can involve getting a local driver’s license, purchasing property, or similar kinds of actions.

Students simply need to spend time exploring their options. If they are eligible for Washington DC grants for college or area scholarships, those can be a part of the broader plan. If not, students shouldn’t get discouraged, as there are plenty of other options available.

Many students are surprised to see how many Washington DC grants are available. These function similarly to programs like the Pell Grant but are administered at the city or metro-area level instead of by the federal government.

For many of these, being a resident is a must. They also have additional requirements, the nature of which can vary from one grant to the next.

If your student is looking for Washington DC grants for college, here are some worth exploring:

Students should also spend time checking out Washington DC scholarships. As with grants, some of these may require residency to be eligible. However, the exact qualifications can vary.

If your student needs scholarships to make the college in Washington DC more affordable, here are some they may want to consider:

Living and Getting Around in Washington DC

Whether your student plans on remaining in Washington DC long-term or simply wants to live there until graduation, understanding what it’s like to live and get around in the city is essential. Most college students don’t spend their entire college experience on-campus. Instead, they explore the area, head home for holidays, and more.

Plus, not all students choose to dorm. As a result, understanding housing costs is crucial, particularly in a higher-cost area like Washington DC.

If your student is attending college in Washington DC, here’s what they need to know about living and traveling in the area. 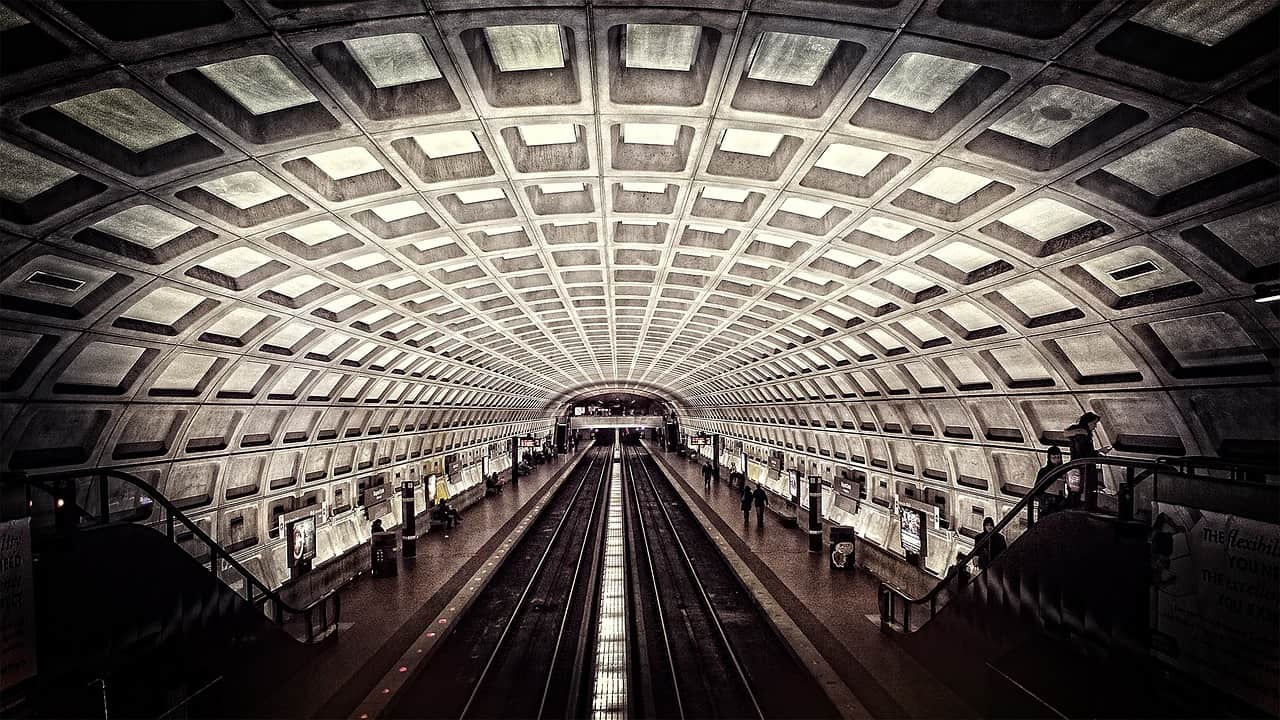 When it comes to housing costs, Washington DC is relatively expensive. The average home value is $493,254, which is far above the national average.

Rent prices are also on the higher side. A one-bedroom apartment will commonly come in near $1,500 per month, while a two-bedroom will be closer to $1,707.

For some college students, the cost of housing will make living in a dorm seem like a better bet. However, by simply knowing the numbers, they can plan more effectively, ensuring they can make the housing choice that’s right for them.

In many cases, getting around in Washington DC is fairly easy, even if you don’t have a car. Buses, taxis, and rideshares are usually available, and there is also a subway system connecting many parts of the city.

When it comes time to venture away from the metro area, there are plenty of ways to do that, too. For students who prefer flying, Washington DC is near several major airports.

Second, there is Amtrak service in the DC metro area, most of which is based in Union Station. Since there are several routes that come through the city, this can give students more options for traveling.

Here is a list of Amtrak routes that stop in Washington DC: 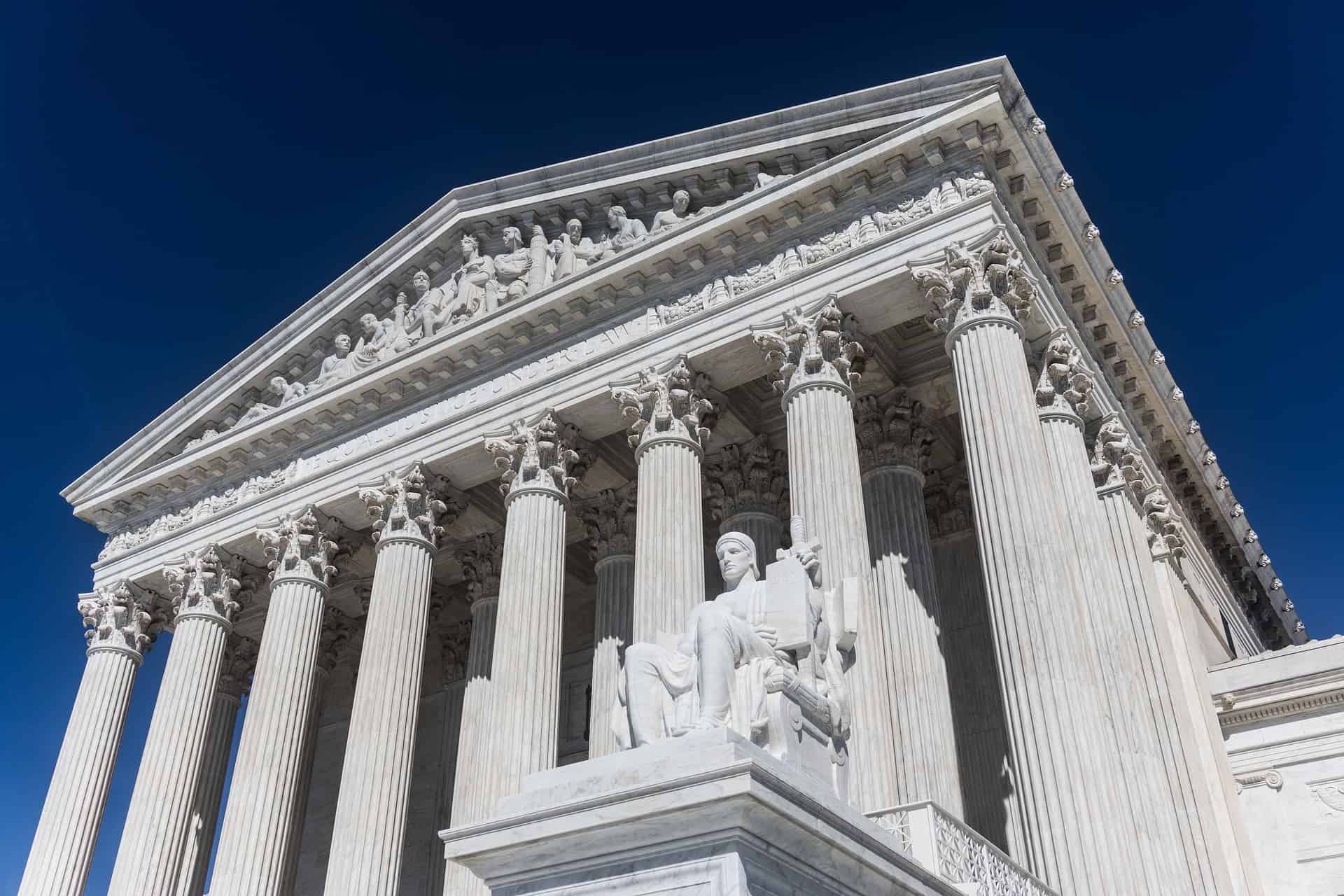 Things to Do in Washington DC

When it comes to activities, Washington DC has a ton to offer. It’s home to monuments, museums, and parks. It has a vibrant art and music scene, as well as a world-renown zoo and aquarium. Plus, there are several local professional sports teams, covering essentially every major sport.

For those who appreciate movie history, a trip to the staircase features in The Exorcist could be a fun option. It’s next to Georgetown University, making it a convenient stop for many students.

If your student appreciates literature, a trip to the Library of Congress is a must. Students with nearly any kind of interest can find something intriguing at the Smithsonian, as it has separate museums dedicated to a range of topics, including art, history, air and space, and more.

When it comes to cuisine and nightlife, Washington DC has both covered. Plus, it’s brimming with traditional entertainment options, including movie theatres.

For many students, working a bit while they are in college is essential. As a result, it’s important to understand the local climate when it comes to employment. Here’s what your student needs to know about working in Washington DC.

As of March 2021, the unemployment rate in Washington DC was 7.8 percent. This is higher than the national average at that time, which came in at 6.0 percent. This could mean that some students may have a harder time finding employment, though the situation may improve as the pandemic continues to calm.

When it comes to major industries in Washington DC, government operations is one of the largest. However, hospitality and tourism also have big roles to play in the local economy, as well as education, retail, and technology.

When it comes to paying for college in Washington DC, scholarships can make any school more affordable. If you and your student want to learn more about finding Washington DC scholarships, sign up for our free college scholarship webinar! Take a trip over to http://thescholarshipsystem.com/freewebinar to reserve your spot today.

« What Is a Student Brag Sheet?
Taking on Debt for College? Don’t Count on the Federal Student Loan Forgiveness Program »