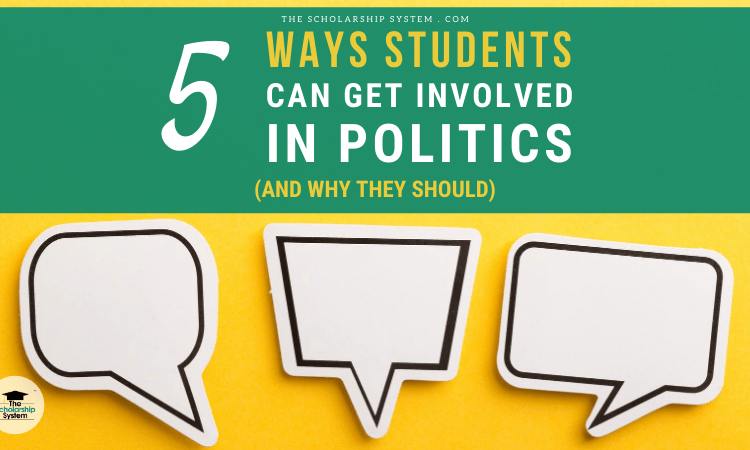 Many students question whether they should get involved in politics. High schoolers predominately aren’t old enough to vote, so they may worry that their voice doesn’t matter. Even college students may have doubts, questioning whether they know enough about various topics to weigh in properly.

While the world of politics can be intimidating, that doesn’t mean students should shy away. In reality, by getting involved in politics, students are creating opportunities to learn and grow. Plus, they can impact their communities, and even open themselves up scholarship opportunities.

Yes, it’s true. Getting involved in politics can help students land scholarships! If you and your student want to find out more about landing exciting college scholarships, sign up for our free college scholarship webinar! Take a moment and head over to http://thescholarshipsystem.com/freewebinar to reserve your spot today.

Often, students just need a little bit of guidance. That way, they can step into the world of politics with confidence. If your student wants to be politically active, help their community, or simply learn about how they can influence government decisions, here’s what they need to know.

Why Getting Involved in Politics Is a Good Idea for Students

First, it is important to remember that there are different kinds of political involvement. While activism can be one approach, it isn’t the only option.

Finding out more about current issues and figuring out their position and perspective can count. Researching candidates before an election, listening to debates, and other similar activities can also count. Each of those options further knowledge and encourage involvement, making them viable places to begin, too.

There are numerous reasons why getting involved in politics can be a smart move. Along with the scholarship opportunities that can open up, being politically active can, in and of itself, be an exceptional learning opportunity.

Many political issues are complex. When students dive in, they are giving themselves a chance to explore a range of perspectives, how certain government decisions impact the masses, and what it takes to find balance in what can be a divided landscape.

Younger generations will, one day, be the backbone of the political landscape. By getting involved early, they are giving themselves a chance to become informed, active members of society.

Additionally, students do have the ability to make a difference. Their voices are important, regardless of whether they are currently of voting age. The decisions that are made today affect everyone’s tomorrow, including theirs. Why shouldn’t their thoughts be heard?

Plus, when students get involved in any activity that tends to include groups, they could be moving closer toward career success. They can network with area movers and shakers, learn valuable skills like organization and leadership, and discover more about how various aspects of the world work.

Ultimately, being politically active young is a wise decision. Ideally, parents should encourage their children to become informed and to jump in, allowing them to play a role in the future of their country. 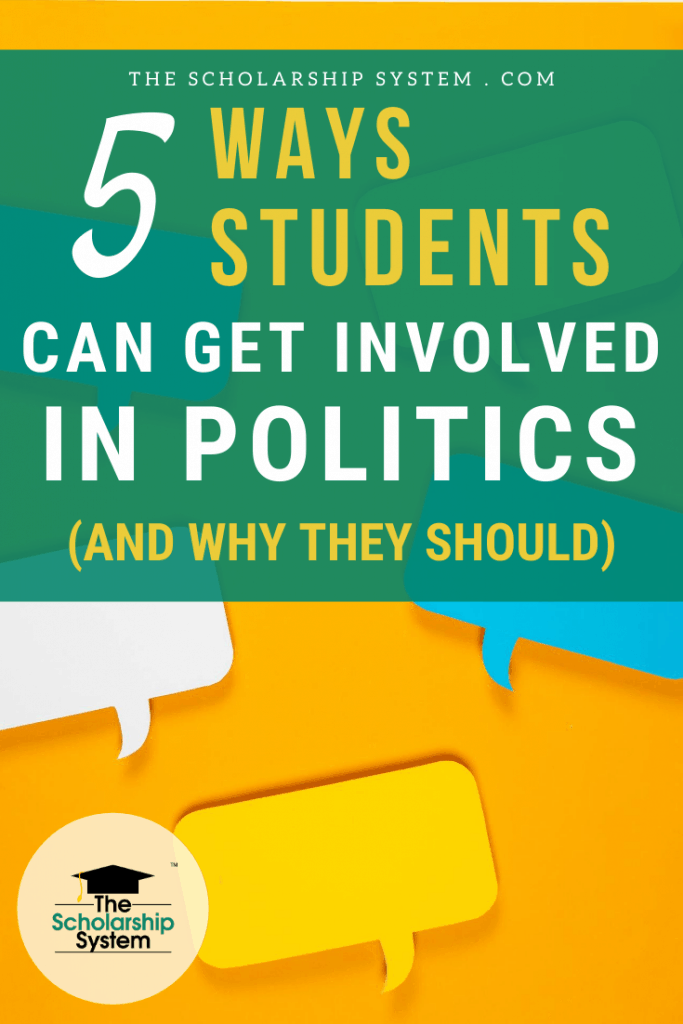 5 Ways Students Can Get Involved in Politics

The most critical first step every student should take is to become well-informed. Many of the most pressing issues of the day are complicated, so it can require some time and energy to learn the nuances of the situation.

Additionally, becoming well-informed means exploring multiple perspectives. A single source may be biased (either intentionally or accidentally), so reviewing different viewpoints and seeing how various sources discuss the issue is a critical part of the process.

The ideal scenario is for students to learn how to separate facts from opinions. At times, this means adopting a bipartisan approach to research, ensuring students can look beyond a party’s stance and formulate their own position. 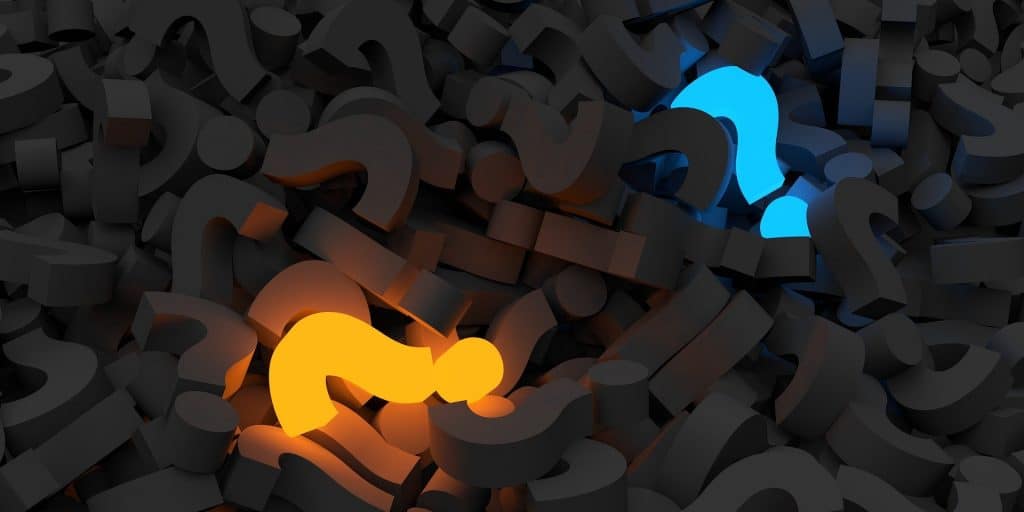 Town halls, school board meetings, and city council meetings can be exceptional learning opportunities. Usually, they focus on local issues in your student’s area, giving students a chance to find out more about what’s impacting their community.

At times, they may even be able to join the conversation. For town halls and city council meetings, involvement ensures the perspective of younger generations are considered. For school board meetings, it allows the students to have a voice in decisions that impact them directly.

Debates can give students a chance to hear about multiple viewpoints on an issue. During election years, debates are essential resources, allowing people to learn about a candidate’s stance on important issues.

However, even smaller political debate clubs can provide value. They encourage participants to research a position and defend it. Plus, your student’s school may run one of these clubs, allowing your student to become an active part of the discussion. 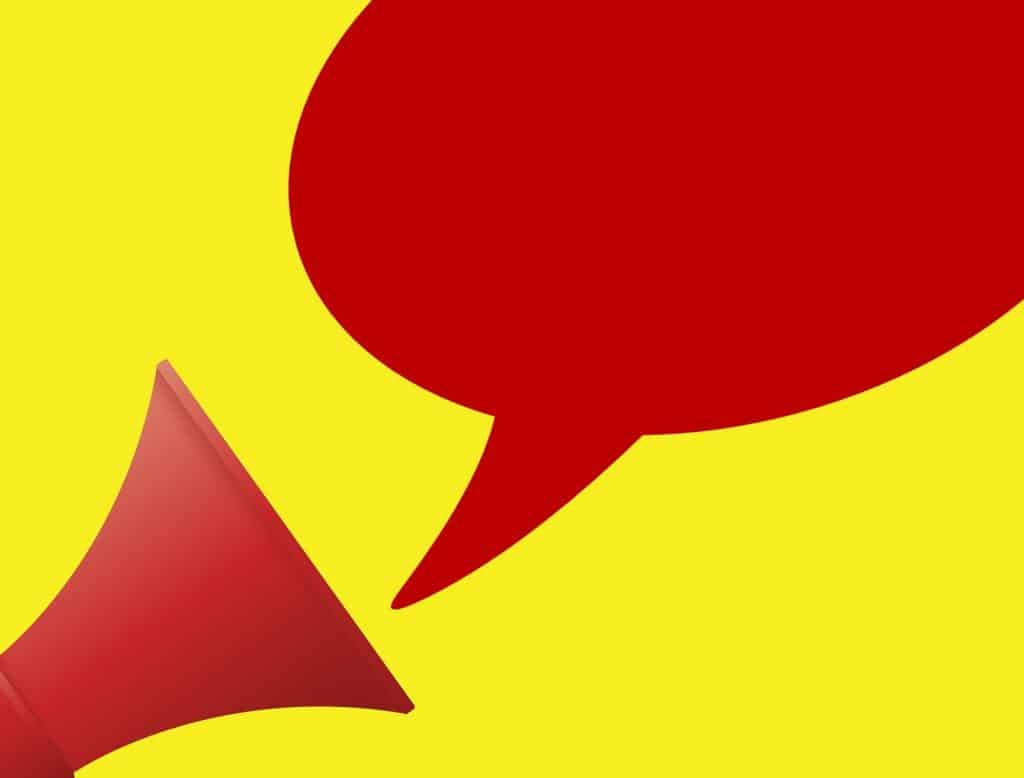 Many politically-oriented organizations allow teens to volunteer. In some cases, the groups focus on advocacy, using their collective clout to try and bring about a desired change or ensure a vulnerable community has proper representation.

Other options have a more direct connection. For example, teens may be able to volunteer on political campaigns. With this, your student can support a candidate or cause they believe in strongly, making them an active part of the equation.

Even if your student can’t yet vote, that doesn’t mean their voice can’t be heard by elected officials. Anyone is allowed to reach out to legislators and share their perspectives, regardless of age.

If your student is passionate about an issue, they can call or write to their local Congressperson, both at the federal and state level. Similarly, reaching out to mayors, governors, and other government leaders is something they can do if they want their viewpoint considered. 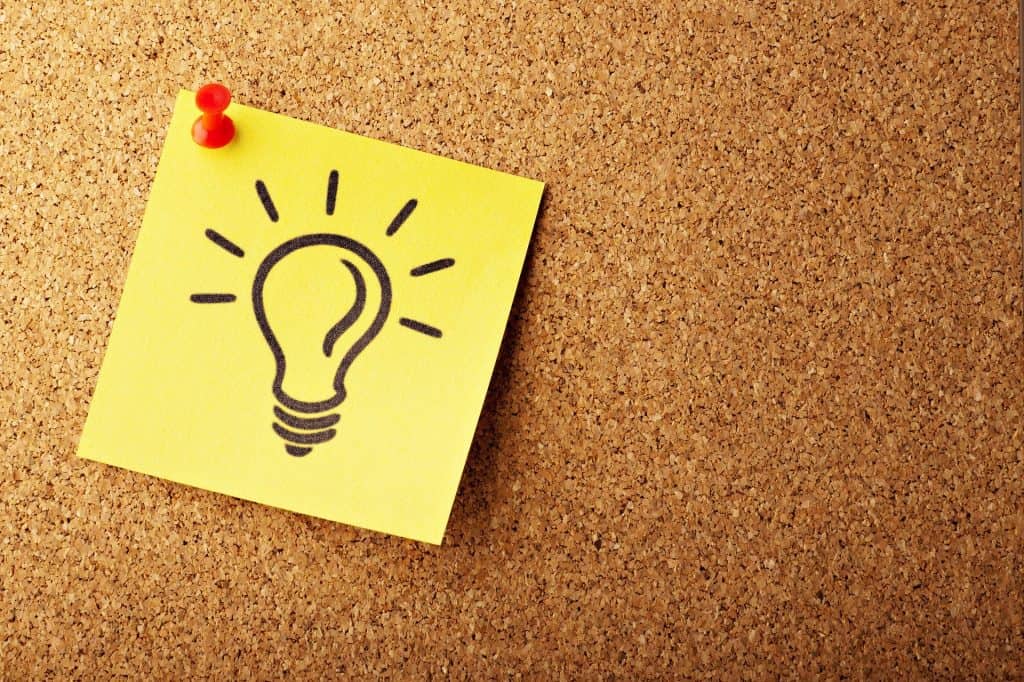 Students can also share their thoughts openly with the masses. If your student has strong writing skills, discussing issues in social media posts or a blog could give them a platform to be heard.

A blog can benefit students in many ways. Along with giving them a place to express themselves politically, it can also help them land scholarships or stand out when they apply to colleges. Social media posts can potentially have the same effect. By using the right platform, your student can express their views on their profile.

It is important to note that this approach can come with some risks. A person’s online presence could impact a college admissions department’s decision and future career prospects. In some cases, the effect is positive. However, if the viewpoint is polarizing or the topic controversial, there could be some fallout, as well.

Additionally, if students express their thoughts on a platform that allows comments, they may be exposing themselves to some negativity. While some commenters may want to engage in lively, informed debate, others may be vicious for the sake of it. This can be hard to take, even if the commenter’s insults are unfounded, so it’s essential to take that into consideration before going this route.

Ultimately, students can get involved in politics. At a minimum, becoming well-informed is vital for everyone. By advancing their knowledge, your student can learn more about critical issues and their viewpoints, allowing them to feel more confident when it comes time to vote on legislation or for a government official.

Yes, it’s true. Getting involved in politics can help students land scholarships! If you and your student want to find out more about landing exciting college scholarships, sign up for our free college scholarship webinar! Take a moment and head over to http://thescholarshipsystem.com/freewebinar to reserve your spot today.

The Scholarship System is all about strategies to help students and their families pay for college. We’ve created a step-by-step process to teach ANY STUDENT how to secure college funding, saving families more than $1.2 Million so far.